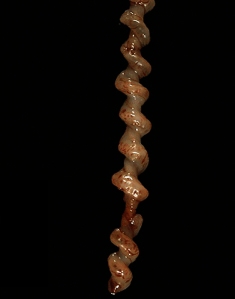 I have been writing posts of late on the huge variety of cuts we can get from meat, whether prime cuts or more humble (or should that be umble?) cuts, but I fear I may not be able to cook you all this one!

The umbilical cords of calves born on dairy farms were often collected by thrifty farmers and turned into a dish known as ‘muggety pie’ by famers’ wives. There’s a description of it in the excellent book Food in England by Dorothy Hartley; she says:

The umbilical cord of the calf was washed, soaked in salt water, and cut into short lengths which were then split open end to end twice, and cut, so making small oblong pieces. These were then boiled, till soft, with onions and seasoning, chopped again and made into a pie, using the gelatinous stock and some milk to make the filling gravy. The whole white pie was then covered with crust and baked.

Muggety pie was popular in the West Country, particularly in Gloucestershire and Cornwall, “all jelly soft it was…it was the jelly gravy was the best part – some did put taters and a turnip and sech, but ‘twas best plain, and good cold,” told old farm-hand.

Foods like muggety pie are dishes that probably never travelled much further than the dairy or cattle farmers’ houses and quickly forgotten. It was borne out of a necessity that no longer exists, but why kill an animal for meat that can be sold on when there is good protein laying there in the hay?

So, if there are any diary or cattle farmers that have a spare umbilical cord or two hanging around, let me know and I’ll bake you a delicious pie!

Don’t worry though, you don’t have to miss out on muggety pie because it can also be made out of sheep’s intestines or a sheep’s pluck (i.e. lungs, heart and liver) that latter of which should easily be found at butchers given a little notice…

I have written a few posts on foraging and natural history in Britain, here’s a little post about a lovely edible mushroom:

As I was walking in Lyme Park at the weekend I kept an eye out for edible goodies. Lyme Park is great for oyster mushrooms because of the large number of beech trees in the forests there. However, I did not expect to find a splendid chicken-of-the woods growing on a dead tree trunk just off the path to the children’s play area! Goodness knows how many had walked past it unaware of the delicious treat.. 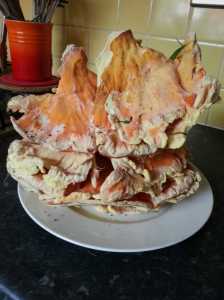 Although I am by no means an expert, I recognised it straight away – a large bracket fungus with multiple brackets with a beautiful and almost garish orange and sulphur-yellow coloration. In fact, another name for it is the sulphur polypore (the polypore part is because it doesn’t have gills on its underside like a typical fungus, but many tiny pores). There really is nothing else like it, so you can be pretty certain of what it is.

However, before I go on: always confirm you have correctly identified the fungus and check more than one field guide. The two I use are the River Cottage Handbook No.1: Mushrooms, for quick reference and the Collins Fungi Guide for more detailed descriptions. If you are not 100% sure of what you are picking, don’t pick it!

As with all fungi there is a certain amount of variation – there can be many brackets or a few, they can be a range of widths from a few inches to a couple of feet, the brackets can be neat and flat, or can look as though they’ve poured out and frozen, like orange lava, in a Dali-esque manner. The one I found had grown around blades of grass, trapping them like flies on amber. I didn’t take it all because I thought I’d see if the intact part would grow back – if I’m lucky I might be able to collect a regular ‘crop’ over the next few months!

Unfortunately, I didn’t take a photo in situ because my phone has run out of batteries, but here’s a few pictures I have found in books and on the ‘net that shows off this variation: 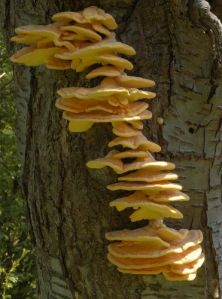 Chicken-of-the-woods, or to give its scientific name Laetiporus sulphurous, is only found on trees, and the trees can be living or dead. It is usually found in the Summer and Autumn, and occasionally in Winter if it is a mild one. It grows most commonly upon oak and also yew, cedar, cherry wood, sweet chestnut, and willow. It is worth pointing out that all Laetiporus species are edible except if found growing on poisonous trees such as yew and cedar.

Whilst on the subject of edibility, I should also mention that Laetiporus sulphurous is only edible when cooked.

This fungus is called chicken-of-the-woods because it’s firm flesh is pale and fibrous but tender, like chicken breast. For that reason it makes an excellent meat substitute for vegetarians. What a coincidence it is that I have a friend visiting me who is vegetarian; we could put the chickeniness to the test.

I did hope it was good because the chicken-of-the-woods I found was pretty big, weighing in at 2 kilograms and bigger than my head! It therefore would keep me and my visiting friend Stuart in meals for most of the week.

Preparing it is simple. Separate the brackets from each other and trim away and tough woody bits then rinse it under the tap briefly to get rid of any soil and creepy-crawlies, then slice it reasonably thinly. Then it is just a question of integrating it into a recipe. As you slice, you’ll notice that the flesh is rather dry, so when frying it you should add a little water so that it can absorb it and become more typically mushroomy in texture. 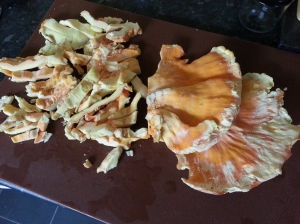 Its firm flesh is tender and yielding and definitely has a truffle aroma and flavour when cooked – there’s a lot of umami going on in that mushroom! It’s definitely the tastiest wild mushroom I have found thus far. We couldn’t understand why it hasn’t been cultivated as food because it was so substantial and satisfying, and better than any TVP, Quorn or other mock meats. Maybe I’ve found a gap in the market…

Here’s what I made with it:

One third was turned in simple mushrooms on toast  – a recipe can be found for that here – the only changes I made was to add a little water after a few minutes’ sautéing, and to omit the cream/milk. Whenever you try a mushroom the first time, this is the thing to cook for it shows it off in all its glory! It fed 4.

The second third was used in a stir fry with the typical stir-fry veg, soy, (vegetarian) oyster sauce and, again, some water. This really showed off its meaty qualities. Excellent. This fed 2. 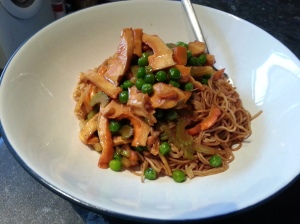 The last third was a spinach and chicken-of-the-woods lasagne. I made a simple béchamel sauce flavoured with Lancashire cheese, black pepper and nutmeg, then sautéed the mushrooms in olive oil, added some water and steamed the spinach on top of the mushrooms. Everything was layered up in the usual way, finished with some Parmesan and breadcrumbs and baked. This fed 4….

Now it is all used up, and we didn’t even get bored of it. I do hope another grows back on that tree trunk…