On a Mushroom Hunt

The British crops have been failing left, right and centre because of the all the warm and very, very wet weather we have had over this growing year. The fields and orchards have been chock full of mouldy, diseased-ridden peas, beans, apples, plums and pears. It’s been a great year for mould.

Mould is caused by fungi and luckily, this year has also been great for the fungi we like to eat: the mushrooms, so as long as they are doing well, we shall always have a good meal. 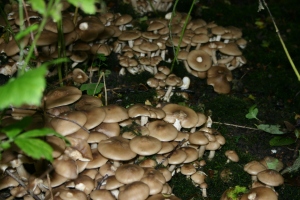 I am pretty new to mushroom hunting, but there are a few species that I already know and love, but faced with 120 000 species worldwide, of which 1841 are recognised as edible (though not necessarily by all). Luckily, I have a background in ecology and evolutionary biology and so I’m okay at identifying and classifying. However, the obvious problem here is that being okay is not good enough when it comes to mushrooms, as you may be rushing down to A & E with the family in an ambulance clutching your Collins Fungi Guide in your clammy palms.

Mushrooms have been held in high regard throughout history because, except for a few European species, they cannot be cultivated in any consistent way. There is no evidence that prehistoric man ate mushrooms, but they were certainly enjoyed in Ancient Egypt and Rome, indeed the Romans were the first to cultivate them. This art seemed to die out with them and it wasn’t resurrected until Victorian times. It’s strange to think that mushrooms were such an expensive ingredient that often had to be exchanged for oysters in many dishes. How times have changed.

Because mushrooms are notorious for their often narcotic and poisonous qualities, there were considered magic during the Middle Ages. Many an alchemist pored over the life cycle of fungi in an attempt to discover the secret of life itself – mushrooms had the amazing ability to create life from decay.

I could go through all the edible species of mushroom in Britain, but that would be rather boring so instead I thought I’d mention the ones I have found so far in this post and then add to it in further posts whenever I come across them.

As I said, I am certainly no expert in fungus ID, but it is for this very reason that I take appropriate precautions.

First of all you need at least two good fungus guides: there is such variation within single species that there can be a lot of overlap between them and therefore potential misidentification. More than one book covers more variation. I think it is best to have one book with drawings and one with photographs. The two I use are the Collins Fungi Guide – which is very in-depth – and River Cottage Handbook No. 1: Mushrooms – which is much briefer but is full of hints and tips.

Aside from the mushroom you are interested in, you need to look for other things: are they single or in clumps, or even patterns? Where are they? Fields or woods? If they are in woods, are they on trees, if you what kind? Therefore it is very important that you know some of the trees: the main players are oak, beech and birch, so make sure you know them, or take along a tree guide with you too.

If I am not really sure at all, I take a photo of them where I found them and pick them with their bases intact so I can classify them later when I have time.

Do not be tempted to take any advice from old wives’ tales as they are almost always wrong. However, most poisonous species have three features that are worth bearing in mind: scales beneath the cap, a ring and a small sac at the stem’s base. Not all will have all three qualities, so not take this advice as read either. The important thing to remember is that if you are not completely sure, don’t eat it!

Over the last week or so I have come across shaggy inkcap, shaggy parasol, wood mushrooms, the rather anti-Semitically named Jew’s ear fungus and a huge host of , commonly called yellowing knight (though the one’s I found were not particularly yellow).

I cooked several dishes with our mushroom crop, but I shall just report two here.

Simple, fast and will show off your mushrooms to their finest. It’s not for dieters.

When you have a glut of mushrooms, it’s a good idea to preserve them in some way. This is a recipe from Elizabeth Raffauld’s 1769 book The Experienced English Housekeeper that turns mushrooms into a delicious, rich and dark seasoning. I’ll leave it to her to tell you how to make it (I have added the odd note in parentheses). 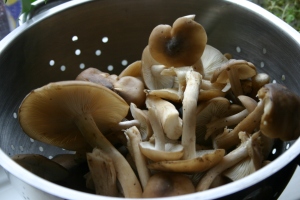 “Take the thickest large buttons you can get, peel them, cut off the root end but don’t wash them. Spread them separately on pewter dishes [or on baking trays] and set them in a slow oven to dry [around 60-70⁰C]. Let the liquor dry up into the mushrooms, it makes the powder stronger, and then continue in the oven till you find they will powder [they will snap easily].

Then beat them in a marble mortar [or a blender] and sift them through a fine sieve with a little Chyan [Cayenne] pepper and pounded mace. Bottle it and keep it in a dry closet.” 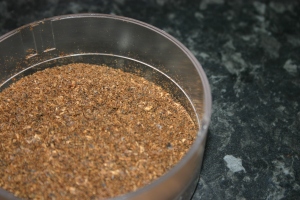 If you like the blogs and podcast I produce, please consider treating me to a virtual coffee or pint, or even a £3 monthly subscription: follow this link for more information.

One response to “On a Mushroom Hunt”