“Out of the strong came forth sweetness…” 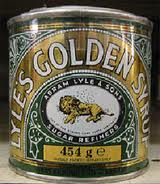 Can there be anything else that sums up British baking as much as Lyle’s Golden Syrup? If you are not British then you might not have heard of it and it is rather difficult to compare it to anything else. It looks like honey, but is viscous like a syrup such as corn syrup and yet it tastes like neither. The taste is more like butterscotch or caramel. It is also commonly called treacle. I absolutely love the stuff and manage to get hold of it here in Missouri to go on my porridge or pancakes of a morning. Oddly, it was never intended to be a commercial product, but thank goodness it became one. I remember as a child, my Dad always used to make us a treacle sandwich after our Sunday baths whilst we dried in front of the fire, soggy towels wrapped around us. 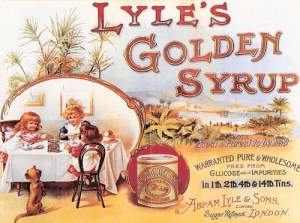 The story of golden syrup starts in 1881when the Scottish businessman Abram Lyle set up a sugar-refinery in London on the Thames with his five sons, processing sugar cane into sugar loaves. In those days, sugar was bought in large tapering mounds that had to be pounded or grated by hand at home. One byproduct of the process was a thick, gloopy syrup that with a little more refining through charcoal was very delicious. So he sold it to his workers from large barrels (Lyle was originally a cooper) and the syrup quickly was anointed with the nickname “Goldy”. Soon, Goldy became popular outside of his workforce and everyone wanted some. Just two years later, in 1883, Lyle’s Golden Syrup was born.

It is the tin the golden syrup that comes in that is the icon of both British cookery and Victorian entrepreneurship. Famously, on the front is a drawing of a dead lion peppered with swarming bees. Abram Lyle was a very pious man, and used the story of Samson in the book of Judges in Old Testament as the inspiration for the design. Quite a while before his fateful haircut, Samson got attacked by a lion which, through His power, Samson was able to rip open, killing it. Later he sees that bees have built a hive within its carcass and he takes some honey to his family and friends and they have a feast. He didn’t tell them about the lion and had them guess how he came about all the honey, presenting them with the poser:

And he said unto them, Out of the eater came forth meat, and out of the strong came forth sweetness. And they could not in three days expound the riddle.

Tins were first produced in 1884 and unbelievably have not changed at all in their design since. In fact, the recipe for the syrup has never changed either – making Lyle’s Golden Syrup the oldest brand in the world. “You’d be mad to mess with Goldie.” The only slight change is to the weights written on the tin: gone are the “1 lb” and “2 lb” marks, their replacement being the “454 g” and “907 g” marks, to keep in line with EU rulings. Another change occurred during the Second World War when, because of tin shortages, Lyle had to make the ‘tins’ from cardboard instead.

For over 125 years, it has been indispensable – it was even taken on Captain Scott’s fateful trek to the Antarctic. He wrote a letter to the Lyle family:

“Your Golden Syrup has been in daily use in this hut throughout the winter, and has been much appreciated by all members of the expedition.”

In 1950, the Lyle Company brought out a second iconic product: Lyle’s Black Treacle. It is very similar to molasses, though it is considerably thicker and stronger tasting. For any recipes that ask for black treacle, you can substitute molasses instead with no problems.

In the American classic The Fannie Farmer Cookbook, there is a recipe for Cornish Treacle Tart (which is actually made from Golden Syrup). In that recipe it asks for three-quarters of a cup of dark corn syrup. Do not on no account ever, ever, substitute golden syrup for corn syrup. The two are incomparable. So, I urge the American public: if you use a recipe that asks for Golden Syrup and you cannot get hold of any, don’t bother making it. Do you hear me? Good, then we understand each other. Amazon’s grocery section stocks it, so you can always get it online.

Lyle’s Golden Syrup and Black Treacle are part of so many wonderful recipes, I would be crazy listing them all, but here are what I reckon are the important or interesting ones. As I add recipes, I’ll add links. If you know of any that I have missed off, please let me know. Here goes:

21 responses to ““Out of the strong came forth sweetness…””